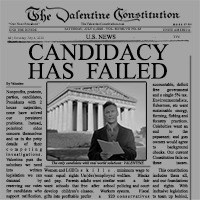 American Citizens have left it up to others to solve their problems. Most actually believe our nation’s problems are NOT their problem but government’s, and rely on elected officials to solve them, but they never do. How much longer will we fool ourselves into thinking seemingly promising candidates will solve our problems when each group repeatedly fails to do so? Even if the two divided stalemated sides worked together, legislating our way out of our problems bill by bill would take forever. And getting all that piecemeal legislation to integrate properly with all our intertwined problems is a big ask of unqualified politicians in a short 2 or 6 year term. It took me 40 years, and I’m an expert. Also any legislation they pass can easily be changed back unlike constitutional provisions. Teddy Roosevelt’s restraints on monopolies were relaxed by Congress in the 1920’s resulting in Wall Street’s 1929 Great Depression, and the resulting legislation enacted to prevent another depression was repealed in the late 1990’s resulting in Wall Street’s 2007 Great Recession. The Valentine Constitution does not suffer from any of these defects.

Candidates are too polarized to solve our problems. They use their “constituents”, that’s you, as an excuse to not compromise. If they could have compromised they would have by now. Even if your wish list of candidates were elected, what legislation would they pass? Candidates are too stalemated, both between and within parties, to pass all the legislation needed to solve our many problems. If they could have solved our problems they would have by now. How much longer will you wait, hoping government, Wall Street, politicians or scientists solve our problems when they haven’t yet? They’ll do nothing unless we push them.

90% of our issues are NOT mutually exclusive. Yet our politicians present them as impossible to solve, blame the other side, and refuse to compromise because they thrive on the problems we suffer from. Most politicians have made millions while in office on a salary of $175,000 per year!? How does a Congressman or Senator make millions on the side while working full time for us? And why can’t they solve nonpartisan issues like infrastructure? If our politicians refuse to come together on infrastructure, they won’t come together an ANY problem. And if they ever do they’ll use the same old roadbuilding materials pushed by the same old campaign contributors and America will slide even further behind in the modernization and innovation race we once dominated, like staying with filthy expensive fossil fuels even though solar and wind are cleaner and  cheaper because that’s what their campaign contributors are set up to do.

Is there even an incentive for them to solve our problems? Not when we reelect 88% of incumbents. That sends the message that they’re doing a great job. Is that our message to them? No, and yet it IS the message we send in every election. We are saying that complacent do-nothing congresses are fine by us. We’re saying that it’s OK to do favors to repay big money campaign contributions. Why would we do that? Because we have had no other choice, until now, with a constitution that gives 90% of us what we’ve wanted for decades, and a way to get it passed.

Keeping our foundations and rights intact while solving all our modern problems, The Valentine Constitution contains all the well thought out, integrated solutions we need. The effects of each solution on the big systemic picture have been weighed and measured. The deal points allow all Citizens a seat at the negotiating table and provide them with a deal they can live with and get done. Citizens and nonprofits and causes and celebrities from different parties will finally be presented with solutions instead of words and be able to focus their combined resources and experience on one common goal: ratification. Getting the word out is all that’s required. Polling will compel candidates to ratify it or not be (re)elected. Unless we dictate play, our problems will never be solved.