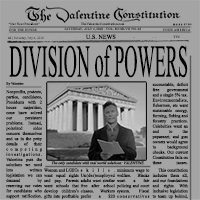 After organizing it all, I first put big nationally oriented programs under the power of the Federal government, and locally oriented programs under the power of the States. Then I organized according to actualities and allowed logic to dictate what went with what putting all of one type of activity and related activities together. Power and communications lines will run along the high speed solar highway infrastructure with decentralized renewable power generation. Energy production will be local to halve our energy needs since half is now lost in transmission from distant power plants to the end user. Since local, I put it under the States’ control. I then logically gave the States infrastructure responsibility, and then building of all government structures, and then building and codes. But permits are handled in each Citizen’s single account for checks and balances by the Federal government who manages information, forms, licensing and all of that type of thing including education and logically also training. So the Fed gets software control and the States get hardware control. I followed our foundational checks and balances model throughout and enhance it whenever possible adding transparencies, accountabilities, citizen oversight and systemic crisscross checks and balances throughout.

I was necessary to consider both discretionary and non-discretionary budgets, and government revenue reliant on numerous taxes and tax-like fees, as well as who takes in how much in taxes, and from where, and where that money goes, and who controls its expenditure? Anchoring the tax and revenue side of this intricate puzzle will be the foolproof single transaction tax which will replace all other taxes and allow direct funding of a cohesive, integrated and coordinated system of government according to the budget percentages set by our Citizens every twelve years. Citizens will be able to track every tax revenue and every expenditure to every division and person responsible.

The Judiciary serves our Citizens fairly and quickly in free online Review Courts with no need for an attorney, no advantage to powerful companies or expensive attorneys, 3 expert advocate judges taking all sides and providing nonbinding opinions and settlement suggestions, all due process rights, and Judgement and Appeals Courts. Supreme Court Justices are elected rather than appointed. Executive appointees must be filled on a much faster timeline than today.

Like The Madison Constitution The Valentine Constitution excludes county or city governments because they muddy the waters of accountability and efficiency by adding two more layers of government, two more layers of problems, and two more layers of potential corruption. Artificial county and city borders only obfuscate State responsibilities now pawned off on minor city or county officials most of whom are unqualified, and unpaid and therefore subject to corruption at a time when residential mobility makes local governments difficult to keep up with let alone keep in check. City and county governments will be abolished to reduce the size of government and the number of politicians and departments our Citizens must keep track of. There will be one department per problem, rather than the four we have now. For example, we now have city, county, state and federal roads and health departments. Instead there will be one road department under state control and one health department under federal control. The Valentine Constitution eliminates inefficient overlap in governments and departments who will be required to own the problem and own the solution. Citizens will be able to quickly and easily find and hold accountable the responsible department and government employee, and more easily track their budget expenditures. The Valentine Constitution reduces government to two manageable, accountable, non-overlapping, checked and balanced halves.