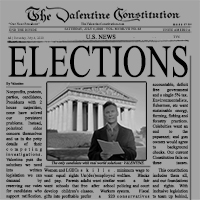 The Valentine Constitution establishes a neutral body in the judiciary to run elections. Today political parties prevent new ideas and candidates not already entrenched in the party from running for office. Parties will no longer dictate which candidates get exposed, which get to debate and which get on the ballot. A handful of primary states will no longer co-opt the candidate selection process and dictate to the rest of us who we get to vote for. Caucuses will no longer unfairly exclude those who cannot show up at a specific time and place to voice their support. Instead a summer selection season will allow fresh ideas and new perspectives, and equal exposure for all candidates and referendums in debates, forums and sites. The autumn election season will allow voters to compare a pared down field consisting of the most desirable summer candidates. The shortened campaign season and a prohibition on campaigning outside those 5 months will allow our elected officials to spend more time working, less campaigning, and none fundraising since campaign contributions will be limited to a modicum for basic expenses. And elected officials will no longer be able to use the resources of their elected office to get elected.

A prohibition on lobbying and PACs will stop the political favors now routinely paid back to big money and special interest donors. Instead our politicians will be beholden to us and not Wall Street. Our pool of candidates will no longer be limited to professional politicians and billionaires or candidates backed by billionaires whose money allows them advertising exposure and the resulting polling numbers that make them eligible to debate. Likewise department heads and politicians will be prohibited from working for corporations they regulate, or regulating companies they worked for, called the “revolving door”. All of these obvious corrupt conflicts of interest now allowed under our current Constitution will be prohibited.

The Valentine Constitution eliminates gerrymandering so that the party elite can no longer manipulate election district borders in deals which divvy up our electorate to ensure wins for each of only two parties, perpetuating do-nothing, stalemated congresses, complacent candidates and stale ideas. Instead similar Citizens will share the same representation. The voting age will be 18 and voting will be mandatory to engage our Citizens in their democracy. Likewise clicking one button to vote an entire slate of candidates, called “blanket voting”, will not be allowed. Preference voting will require a voter to make 2nd and 3rd choices in case their 1st choice is not elected so their vote will still count, and so marginal candidates will no longer siphon off votes allowing less popular candidates to get elected over more popular ones. Citizens will vote online in each Citizen’s single account to guard against fraud, to accurately verify the Citizen, to ensure each votes only once, and to increase voter turnout due to convenience, so the candidate with the most people willing to drive folks to the polls doesn’t necessarily win. Polling and handicapping within 30 days of voting will be prohibited so that voters voting late are not dissuaded from voting, making each vote count the same. Likewise projections and vote tabulation announcements must wait until all votes are counted.

The electoral college and winner-take-all are abolished in favor of a true representation of the popular vote. The Valentine Constitution instead gives each candidate their PERCENTAGE of the votes won in each state, then totals all of those nationally, so that the candidate most voters want gets elected. Under our current Constitution whoever wins gets ALL of that state’s electors, as though everybody voted for only one candidate! The votes against the winner do not count! In fact it’s worse. The votes AGAINST the winner are counted as FOR the winner since the winner gets ALL of the electors. To correct this distortion of the will of the people, The Valentine Constitution allots votes equal to the number of the State’s Representatives plus the number of the State’s Senators (two per state). These are not electors, not delegates, but votes using the same allocations of power as our US Congress. The votes are awarded in the same percentages as the statewide popular vote. Some states have few representatives, so a single vote may be divided if necessary to accurately reflect the correct percentages. Then all votes are totaled nationwide, and preference voting allows all votes to count.