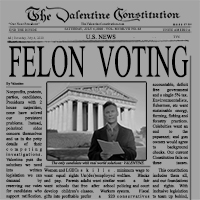 Felons should have thought about losing their voting rights when they decided to break the law. The revocation of voting privileges is part of the punishment and a deterrent to crime. Furthermore, it prevents a bunch of felons or an organized crime syndicate or gang from teaming up to vote criminals into office. Just because a few stoners who sold a few joints were turned into felons by an overly aggressive justice system, doesn’t mean we should welcome rapists and thugs back into our society with open arms. That’s the real reason so many people are trying to restore felons’ voting rights. Their real issue is over-incarceration, but they failed to fix it, so they’re settling for putting a band-aid on one of the symptoms by restoring felons’ voting rights. Sadly many of them will stop trying to fix over-incarceration if they get felon voting rights restored and the real problem will never be fixed. Felon voting is not what they want, just what they can get, until now. The Valentine Constitution fixes the real problem, the root cause: over-incarceration, and in turn removes most of the desire to restore felon voting rights since all felons would be truly bad actors.

Fixing symptoms rather than causes often creates unforeseen problems. Don’t make your fix someone else’s problem, or you then become part of the problem instead of the solution. One example of the result of this ill-conceived symptom fix is that the felon who raped the girl and ruined her life may well end up 5 to 10 years later standing next to her in line at the voting polls! That’s not right. A felon who sold drugs to a woman’s child and messed the kid’s mind up for life gets to vote? A felon who robbed a bank or stole a car at gunpoint! These criminals don’t deserve to vote. Blanket felon voting rights would allow these bad felons to have their rights restored along with old weed selling hippies. At what cost? Felons are liable to vote for bad people because they’re bad guys. It’s the worst idea ever. Creating a voting block of felons is stupid.

Society and the victims of felons did not commit any crimes here. The FELONS DID. So don’t guilt trip us, cause we’re not their suckers anymore, we’re their victims and always will be. What they did to us hurts for life, which is a lot less than the sentences they usually receive. The good hearted, kind people trying to get felons back their voting rights are not the felons either. They are the felons’ suckers. The vast majority of felons aren’t lifting a finger to get their rights restored. But if suckers want to do it for them, they won’t turn them down. Just don’t expect them to thank you. That’s not their style either. They just think you’re a sucker, and they may have something there. They’re felons. Most of them chose and will choose the EASY WAY OUT. An easy way to test this fact is to ask them to match you, effort for effort, in restoring their voting rights, and see how many rise to the challenge. Or just let me save you the trouble. ZERO. Takers are takers. All they’re doing is drawing you away from the real fight, fixing the over-incarceration problem, and the problems that drive kids to crime in the first place, bad schools for one, an enslaving minimum wage for two. All of this will be fixed by The Valentine Constitution. If you want to get something done, help ratify it. A felon lacks morality and ethics and discipline and will probably lack those attributes all his life. Some change; most don’t. When felons decide to hurt our society they give up the respect we gave them. We don’t trust them cause they’ve given us lots of reasons not to. They’re just going to have to live with their mistakes like the rest of us. The Valentine Constitution solves the problem of over-incarceration, but prohibits felons from voting.