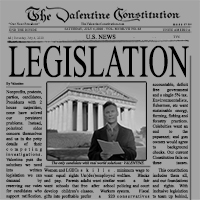 When a legislative bill is changed on the floor it will have to be re-voted, for changed legislation is new legislation. Our problems are integrated and so must our solutions. Any change in a legislative solution must be reconsidered since all of its effects must be newly considered. Furthermore, not requiring a new vote on amendments would enable members to plan to rewrite and amend and therefore to calculate, scheme, or wait to include a provision in the amendment phase where it now receives less scrutiny than if it were included in the original bill. Thusly members are now allowed to pass a portion of law without the proper authorization of the state, thereby violating the sanctity of the legislative process. This has recently occurred and the general rule of law has been relaxed to accommodate the big businesses who have corrupted our politicians with campaign financing and lobbying and the revolving door, and taken over our treasury to benefit themselves to the detriment of middle class Citizens who were forced to bail them out after they ruined our economy and left us with $200 trillion in future obligations and a $40 trillion in national debt which costs us 22% of our budget annually in interest alone.

Greed led to excesses, and cheating was required to cover all the oversights. Our financial system collapsed and the corrupt leaders of our government dealt with the excesses with the additional excess of of quantitative easing, the equivalent of printing money that has no real value. This second round of excess appears to be innocuous by comparison to the first, but no amount of economic trickery will forgive our national debt, or even prevent this second bubble from bursting, A person going bankrupt, or a company, or even a small country going bankrupt is an economic hindrance to all. But when the greatest, most trusted standard setting economic power in the world has tried its last trick, the piper will appear and need to be paid. With this and other provisions, The Valentine Constitution nips parliamentary malpractice in the bud and avoids the corrupt legislative procedures that have already led to one economic collapse.

Likewise dangerous and corrupt “riders” to a bill now allow a politician to quietly add onto a bill a small provision unrelated and inconsequential to the bill being considered. As the bill is considered, the added provision now gets glossed over often going completely unconsidered while being passed along with the greater legislation. The rider may allocate funds to a project or create a new project or be any manner of legislative action or mandate. Deals are often made whereby a member agrees to allow other members to put riders on his bill so long as they return the favor. Many riders are now routinely attached to every bill. Riders have contributed significantly to the chaos and systemic failure of our current government and national debt. Riders have added considerable costs to annual budgets, often to enrich a select few to pay back a campaign contribution or a favor. All legislation is related and must be considered as part of a deliberate, integrated, well organized system of government with a clear plan for the future. Riders are yet another debilitating parliamentary instrument prohibited by The Valentine Constitution.