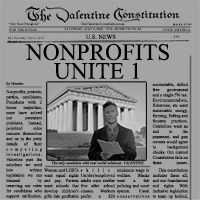 The Valentine Constitution gives nonprofits the power they need to finally fulfill their missions. It supplies written legislation that fulfills your and other nonprofits’ missions, and provides a way to get it passed. ALL nonprofits have failed for decades because a single nonprofit cannot do it alone. All of the board meetings and fundraisers, galas and events, volunteers and literature, websites and newsletters, emailing and mailing campaigns have been for naught, likewise marches, protests, movements and candidates. It’s wiser and far easier to ratify a constitution that fulfills our missions than try to elect candidates who never have and never will. Why waste time on cantidates when we can dictate solutions through ratification by teaming up with other disappointed nonprofits to get the job done once and for all? The Valentine Constitution fulfills the missions of the vast majority of nonprofits who will gladly back your provision if you back theirs’s.  Teaming up on ratification will succeed because 1) it focuses the experience and resources of an army of nonprofits and voters on one common goal, ratification, which fulfills all of their missions in one fell swoop; 2) it magnifies the power of every nonprofit, cause and voter who joins; 3) it does so on a national level, not state by state; 4) it provides a constitutional provision, not a bill that can later be easily adulterated or repealed, and 5) it allows each nonprofit to promote ratification as they see fit, independently, or in collaborations with other nonprofits.

The largest political website in the world, TheValentineConstitution.com is a million dollar informational website that provides supporters with properly messaged, easily shareable tweets, pamphlets, posts, bullet points, summaries, blogs and op-ed material, as well as snippets on every issue in every platform to tweet, share, instagram, text or email, allowing you to easily spread the word and win every debate. We will end the divide because 90% of our issues are NOT mutually exclusive, and these solutions debunk the apparent conflicts. Both the left and the right can push for ratification since both sides will get their pet issues passed while compromising to allow the other side to get theirs’, something our politicians have been unwilling to do. It’s a nonpartisan deal that brings all Citizens to the bargaining table and unites America in a deal that gets most Americans what they’ve wanted for decades in the nation’s first inclusive legislation since we were formed.

Polling will compel candidates to ratify it or not be (re)elected. They’ll be happy to be let off the hook for not having to solve our problems, and not have to take any blame, yet be able to take all the credit by voting for it. Passage will allow nonprofits to finally take their missions into the more gratifying phase of implementation after all those decades of hard work spent hoping. Ratification unites nonprofits, fulfills their missions, and solves our nation’s problems.