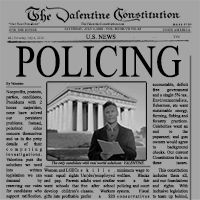 State run with Citizen oversight, the community oriented soft crimes department consists of an unarmed paid social worker and a local volunteer. These Social Peacemakers will handle misdemeanors, calmly discuss the cause of the problem, and offer deals, programs and solutions. Soft crimes will be dealt with by sympathetic, understanding, cool headed, calm people who have a genuine concern for others. Upon the alleged commission of a misdemeanor, a Social Worker and an unpaid Peacemaker, both locals from the community they serve, will travel to the scene of the problem and calm everyone down if necessary. Both the Social Worker and the Peacemaker are selected due to their particular expertise in that particular problem area. They will be experienced in petty theft, domestic disturbances, drunks, etc., even particular kinds. They may call a Review Court justice to clarify disputed legalities, or accept a mutually agreeable short sentence in prison boot camp, and the justice may appear on the scene if they so desire. A petty theft or a domestic dispute or or a disorderly drunk or a fight will be straightened out, stipulations may be made, programs will be offered instead of fines or jail time, or jail time agreed to, and rides will be arranged to separate folks or get folks home.

Arrests, processing, adjudication, fines and jail time often cost these petty perpetrators their jobs and always cost them money they desperately need at the worst possible time. Money is often a primary contributor to petty crime so spending money or losing a job will likely weaken their already tenuous situation making them less able to fix the underlying problem when the goal is to make them more capable. Our government will take the money we’ll save not having to fund negative ineffective incarceration and fines that alienate our Citizens and exacerbate their problems, and instead spend it on positive, effective programs that support our Citizens and help them solve their problems.

An armed arresting officer is the wrong person to send to a domestic dispute, a gun to a fist fight. Our Citizens should not be criminalized. Emotional couples, drunks, petty thieves and other misdemeanor criminals often have their only contact with our legal system at these times. It is a scary time for them, and an opportunity for our government to help them become better Citizens, regain emotional and financial control, and get their lives together. Arrest fails to accomplish any of those goals, and instead creates a hater of the legal system and of our government and subtracts fines from their tiny bank accounts. These Citizens are not so much committing crimes as making mistakes. An armed officer intent on arrest is the wrong dog for this fight. State laws now require that one of the two Citizens involved in a domestic dispute be arrested! No alternatives are available to the officers called to the scene! It’s not fair to the cop or the perpetrators.

The “hard crimes” law enforcement agency will be national and federally run with one chain of command and Citizen oversight. Hard crimes detectives will be armed and backed up by unarmed in-office logistical and analytical teams for checks and balances. They will deal with major white and blue collar and T-shirt crimes like homicide, armed robbery, burglary, rape, fraud, racketeering, organized crime, etc. One agency with one national chain of command will eliminate local corruption, competition for collars and the dangerous overlap of investigations when 2,3 or 4 agencies pursue the same case wasting resources and time. A separate chain of command facilitates communication, coordination, the sharing of resources and information, and the confidentiality necessary to avoid compromising investigations.

Both crime departments will have Judicial and Citizen oversight through the Review Courts. Both crime units will be required to wear body cams. Citizens will report crimes using a simple app and phone cameras. Any officer making more than 3 false arrests will be disciplined by the courts. Our crime units will be further checked and balanced by our Armed Forces tasked with immigration and homeland security, and our State Guard fire or Road Ranger or crowd control units. During marches and protests State Guards will protect property and embed with protesters to protect both from bad apple agitators. Peacemakers will give their fellow citizens helpful directions or instructions or information like local alcohol ordinances during large public events or protests.