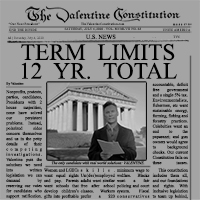 Limiting the total time in one elected office to 12 years reduces corruption and cronyism and exposes new candidates with innovative ideas and fresh perspectives. Seniority and complacency are removed, along with do-nothing, stalemated Congresses. With a 94% re-election rate in the House and 83% in the Senate, our unbeatable career politicians have become smug, complacent and intransigent giving us stalemate after stalemate in do-nothing legislatures. Through seniority they acquire a disproportionate and undemocratic amount of power on committees where they are more likely to vote to protect their position or pay back a campaign contributor than to consider their constituents or effect meaningful, heartfelt change. Each party fights to reelect incumbents in order to preserve the power of seniority and committee assignments for their side.

More concerned with their re-election problems than with our everyday problems, career politicians don’t have real jobs, are out of touch with voters’ daily realities, are in the pockets of big business, and are more likely to vote for special interests than for Citizens who are 90% likely to re-elect them no matter what they do! Since they know they’re going to win, they’re under no pressure from their constituents who reward them for maintaining the status quo in election after election. Voters give politicians no incentive to do anything more than fundraising, which then requires payback. The corruption allows them to get rich along the way. On a $175,000 annual salary, Nancy Pelosi is worth $200 million?  Meanwhile the short-sighted, self-centered American electorate is AT the game, not IN the game, and leaving it up to others to solve their problems.

Insulated by their membership in one of two members-only political clubs, our politicians are deeply involved in their own little world of power and gamesmanship, unmotivated to compromise or legislate, constantly fundraising and paying back their contributors with political favors, and using their committee seats and seniority to do so, all to the detriment of our republic. Smug in the likelihood of their gerrymandered reelection, and distanced by power and privilege from the realities of Citizens they can’t even relate to, our elected officials are the least likely people to adequately represent their constituents. Far removed from hand-to-mouth realities, they have no practical experience living in the real world and are therefore incapable of creating solutions to deal with real world problems. Better to replace the cronies with elected officials who live among, and not above the rest of us.

New candidates and fresh ideas are now locked out of our political process, unless they’re billionaires or sell out to one and can buy themselves awareness. Non career candidates, the very people our founders envisioned running, are discouraged from running by parties who control who gets into debates and onto ballots, and by voters who are never made aware they exist, or think they’re illegitimate if they can’t make the debates. Both parties also work with each other to keep third party and nonpartisan candidates out of the election process and out of the news. Both parties collude with our Wall Street owned national press to sideline nonpartisan or third party candidates or “disruptive” candidates in their own party since nonconforming and nonparty candidates threaten party power players.

Unless a candidate gets press coverage, voters will not be exposed to them. Without press, new candidates cannot poll. Without polling, they cannot get into debates. Without debates, they cannot rise in the polls. And so the people most likely to get us out of the mess we’re in are presented if at all by the press as ranting losers, and are therefore seen by American society as such, DOA, especially since these are not marketers but scholars presenting real solutions to complicated problems unlikely to fit into a soundbite. Meanwhile at the debates career party candidates can’t even agree on what we need when we need everything, and point the finger at each other while presenting no solutions of any kind. The press corps asks no questions about water or air or food since that would anger their Wall Street owners who are destroying our planet with their addiction to money.

The Valentine Constitution limits total years in any one elected office to 12 years, but ALLOWS a 2/3 vote to provide one additional term for excellence. In other provisions it prohibits seniority and committees, and has a neutral body run a 5 month election cycle exposing all candidates.