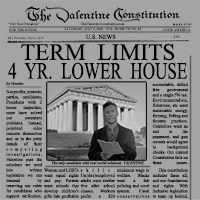 Four-year terms allow enough turnover to bring in fresh ideas and new perspectives, while avoiding the perpetual campaigning which plagues two-year term Representatives. No sooner do two-year term Representatives take office than they are back on the campaign trail again, raising money from special interest and influencing legislation on their behalf, and using their time in office to get themselves re-elected rather than to govern. As a result, two-year term Representatives have little time to learn the legislative process and get any work done. Instead they’re constantly distracted by re-election considerations and adversely affected by having to pay back those who finance their campaigns often in real time. So our lower house legislators are constantly in campaign and pay back mode, and we have legislatures full of marketing experts rather than good lawmakers. Their primary job becomes re-election and their part time job becomes governing. The Valentine Constitution rectifies the problem by increasing lower house terms from 2 years to 4 years so our lower house elected officials spend more time working, and less campaigning.