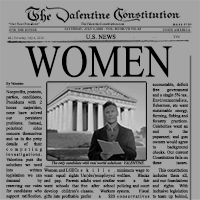 Women have longed for an explicit equal rights amendment which is long overdue. The Valentine Constitution establishes equal rights for women by constitutional provision once and for all. Equality is so obviously a right that it requires no treatise nor arguments in its support. Any legal justification required is provided by the right of all to an equal station in life guaranteed by our Declaration of Independence. This right is blatantly ignored by our current Constitution and Bill of Rights since women were considered “chattel” when Madison wrote them, and often even a lesser property than a man’s horse or prize bull! Equality rights we have come to accept as normal are still not yet normally applied since they still do not exist under our current constitution or amendments! Nor have any of our verbose politicians or ineffective nonprofits managed to include women’s equality in the legislation of our day! How can so many fail for so long? The recent woman’s march in Washington D.C., the largest march in the history of the world, also failed. The Valentine Constitution succinctly and logically groups all of the various equality rights together at last under a single provision whose various beneficiaries may easily combine their many resources to ratify.

Equal pay for equal work logically follows any consideration of gender equality. Women are being ripped off. Why? Because they can be. Other citizens, either individuals or groups, are likewise being cheated. The Valentine Constitution establishes equal pay for equal work for all our Citizens putting the weight of law behind this obvious right. Equal rights are supported by 95% of Americans, guaranteed by our Declaration of Independence, overlooked by our current constitution, but reaffirmed by The Valentine Constitution.

The Valentine Constitution prohibits stalking and lewd sexual harassment, bullying, bashing and the taunting of any Citizen and adds tools to prosecute and prevent rape and child molestation. Offenders getting away with catcalling and pinching and lewd comments become emboldened, fueling their hatred and encouraging acts of anger like bullying, rape or spree killing. The Valentine Constitution nips the problem in the bud. Daily relationship classes in its K-12 schools, and available to adults nights and weekends, will expose bullies, louts, bashers, rapists, molesters, and spree killers before they do harm or further damage. The rape of a woman ends her life, or at best the life she once knew. Half of the women on Earth have been raped or molested instilling fear and violating freedom. Formal and informal programs will help victims heal and perpetrators correct their bad behavior so offenses don’t escalate into expensive prison sentences. Policing will shift its current primary focus on questioning the victim or the prostitute, to aggressively pursuing and questioning the rapist and the Johns instead. The first 3 months of any sentence, prison boot camp uncovers the causes and corrects offensive behavior by instilling respect in and practicing tough love with offenders, generating a record-shattering 80% non-repeat rate among offenders! The Valentine Constitution makes it a crime NOT TO report wrongdoing. Most offenders are hiding in plain sight: the beneficent priest, the concerned coach, the nice father who’s beating his wife or molesting his daughter. The fact that all Citizens will know that these unacceptable behaviors must be reported by the victims and witnesses, will go a long way towards decreasing offenses.

The Valentine Constitution provides equal rights and equal pay for women, nips cat callers, bullies and bashers in the bud, stifles strip clubs and pornographers, prosecutes Johns, molesters, rapists and pimps, and effectively involves our society in these problems.