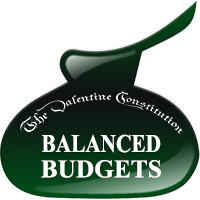 Under The Valentine Constitution there will be only one budget for all of government because there will be no overlaps of responsibilities. Citizens will vote to (dis)approve our general percentage budget outlays every 12 years. Our current national annual budget totals follow: interest on our debt 22%; Medicare and Medicaid 31% (half in the last months of life); Social Security 27%; military and veterans costs 13%; schools 2%; infrastructure 2%; environment 1%; government 1%.

The Valentine Constitution prohibits government debt. Today that would free up 22% of our budget to spend on other things. Our government’s budget, which will include every state and federal department’s budget, will always be balanced. An AAA credit rating, and an annual foreign trade surplus are also required. Since the single transaction tax goes immediately and directly to the departments according to our budget, no government shutdowns can occur, and Citizens will be able to easily track each tax dollar to its expenditure. All the crazy accounting for today’s money movements between federal, State, county and city governments, and between agencies participating together in projects, will be replaced with simple, traceable, streamlined accounting.