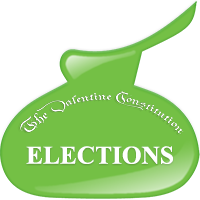 A neutral body in the Judiciary Branch will manage our 5-month election process so our elected officials will spend more time working and less campaigning, no time fundraising and less paying back funding favors. Summer selection exposes voters to the fresh ideas and new perspectives of candidates now prevented from running by political parties who will no longer be involved. The Valentine Constitution makes voting mandatory and establishes preference voting and run-offs; eliminates corrupt gerrymandering to give similar Citizens their own representation; bans election polling and handicapping within 30 days of any election or primary; holds off on projections and the announcement of vote tabulations until all votes are counted; prohibits PACS, lobbying and campaign contributions; prohibits department heads from working for the corporations they regulate; and nullifies all the associated political favors.