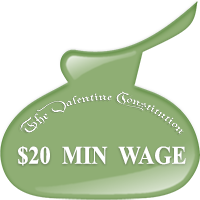 Minimum wage workers are cheaper than slaves. Slaves would cost CEOs twice the minimum wage to feed, clothe, house, transport and keep healthy. Welfare, paid by taxpayers, allows America’s “working poor” to survive, subsidizing companies that pay only the minimum wage. In Walmart’s case we enrich the three Walton kids, already multi billionaires, while companies like Apple make $350,000 per employee IN PROFITS per year, yet pay them only $35,000 per year. The greed is appalling!

Small businesses, which supply 85% of our jobs, cannot pay $20 per hour for the second rate workers that America’s schools and immigration policies now put into our market place. Workers will be forced to up their game to merit the higher pay grade. The Valentine Constitution’s K-12 school curriculum does just that by developing the gifts and aptitudes of its students for commerce, teaching them real world skills, and providing mentorships and apprenticeships in their communities. Adults will learn real world skills in free classes taught by pro bono retirees nights and weekends, and in mentoring and apprenticing programs.

A living wage encourages learning new skills and getting and keeping a job, reduces welfare and crime, creates stable families, and fosters competition, entrepreneurship and innovation nationwide. CEO pay will be limited to no more than 100 times the lowest paid employee. 75% of products sold in America will be made in America by American Citizens. 95% of all jobs performed in America will be performed by American citizens.