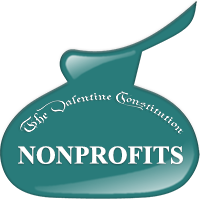 All the nonprofit organizations with all of their board meetings and fundraisers, galas and events, volunteers and literature, websites and newsletters, emailing and mailing campaigns over all of the decades have failed. Because no one can do it alone. The Valentine Constitution satisfies the missions of the vast majority of our nonprofits and electorate who will gladly allow you your provision if you allow them theirs. Ratification is a simpler message and an easier vote than a bill or referendum because: 1) It focuses the resources of an army of nonprofits and voters on one common mission, ratification. 2) It magnifies the power by every nonprofit, cause and voter who joins. 3) It does so on a national level not state by state. 4) It uses a constitution not a bill that can later be easily adulterated or repealed.

Through polling alone this all-inclusive coalition can dictate passage of already written legislation to candidates who will be happy to be excused from solving our problems and will have no choice but to vote for passage or not be (re)elected. Passage will allow nonprofits to finally take their missions into the more gratifying realm of implementation. Ratification unites nonprofits, fulfills their missions, and solves our problems. It’s wiser and far easier to ratify a constitution that solves our problems than try to elect cantidates who never have.