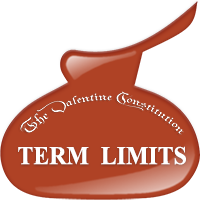 The Valentine Constitution limits total years in any one elected office to 12 years to reduce cronyism and corruption. The Valentine Constitution prohibits both the revolving door and campaign contributions so payback is already reduced, eliminates seniority and committees where most power today is amassed over the years, and requires equal power among members so excessive power is less a problem. But still, the more years in office, the more legislation is influenced, yielding more opportunity to sell favors. If the past is any indication, the rich and powerful will always find corrupt ways to influence legislation, and the longer they have, the more ways they’ll find. Term limits cut off any corrupt practices that may be going on. The odd excellent career politician will be able to do their same good work in other elected offices, and/or specialize in their areas of expertise as department heads, or may be granted an additional term with the consent of  2/3rds of the voters.

Lower house terms are increased from 2 years to 4 years so that elected officials will spend more time working, and less campaigning. Their governing is now constantly distracted by re-election considerations. Analysis of their last campaign during their first months in office yields adjustments immediately formulated into their strategy for the next campaign season only months away, putting our Representatives today in constant campaign mode. Their primary job becomes re-election and their part time job becomes governing and we end up with legislatures full of marketing experts rather than good lawmakers. 4 years allows enough time for politicians to learn the legislative process, simplified under The Valentine Constitution, and get some real work done. 2 years does not.