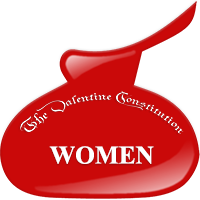 The Valentine Constitution establishes equal rights for women, and equal pay for equal work by constitutional provision once and for all, succeeding where candidates and nonprofits have failed for decades. By grouping all of the various equality rights under a single provision, causes can combine their many nonprofit resources behind one common goal, ratification, along with many others whose missions will finally be fulfilled.

The Valentine Constitution ends the harassment and abuse of women, prohibits sex for pay, stifles “breeder” industries, limits strip clubs, pornography and excessive violence removing their free speech protection. Police will interrogate and investigate Johns, pimps and rapists rather than harass victims who instead will be supported with programs. Abortion will be under the sole control of the pregnant Citizen, and schools will teach religion and prevention from every angle and discourage out of wedlock pregnancy. Maternity leave is granted for 2 weeks prior to the due date and 1 month after delivery, but compensation is a loan from the government to be repaid when possible.