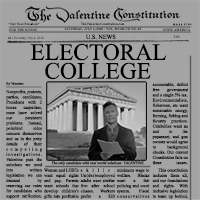 The Valentine Constitution takes political power away from the few insider elites of the electoral college and gives it back to the voters. Today the electors of the Electoral College are chosen by the parties, and are supposed to represent us at the ballot box! Are we incapable of voting directly for the candidate we want? Do we need a representative to cast a vote for us? Having someone represent us at the ballot box is ripe with corrupting possibilities, a real temptation for wrongdoing and power mongering, and why 90% of voters want to abolish the electoral college.

Under our current Constitution all but two states are “winner-take-all“, so whoever wins gets ALL of that state’s electors, as though everybody voted for only one candidate! The votes against the winner do not count! In fact it’s worse. The votes AGAINST the winner are counted as FOR the winner since the winner gets ALL of the electors.  It’s a distortion of the will of the people. The Valentine Constitution instead gives each candidate their PERCENTAGE of the votes won in each state, then totals all of those nationally, so that the candidate most voters want gets elected. These are not electors, not delegates, but votes using the same allocations of power as our US Congress equal to the number of the State’s Representatives plus the number of the State’s Senators (two per state). The votes are awarded in the same percentages as the statewide popular vote. Some states have few representatives, so a single vote may be divided if necessary to accurately reflect the correct percentages. Then all votes are totaled nationwide.

During the national tally, the votes for the 5th then 4th then 3rd place finishers go to the top two candidates as per “preference voting“. Preferences are applied until only two candidates remain, and one is the winner. The remote possibility of a tie would trigger a “runoff” vote. This method of national voting is popular because it reflects the national popular vote.