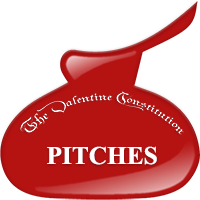 Example for a volunteer named Robert.

His name’s Valentine. He’s an independently wealthy 4.0 GPA who skipped 11th grade, went to UVA where he started this project at age 17, then spent 55,000 hours to come up with nonpartisan solutions to all the modern problems our current Constitution fails to cover while keeping 90%, our foundations and rights intact. It’s an historic document that warrants a serious look.

It provides everything Robert has wanted for decades but failed to get, like all underpowered nonprofits, celebrities, marches and candidates. If any of them were going to solve our problems they would have by now. It time to try something new, before it’s too late.

TVC allows you all to combine and significantly magnify your power, and focus it on a single common goal, ratification, to finally fulfill all their missions together.

All the information is bite-size, spoon-fed and shareable in 3 clicks on the world’s largest political website and App. He even wrote a 300 page policy book describing how it all connects for those who are serious, systemic solutions to systemic problems.

If Robert is serious about solving black issues, then why not spend 10 minutes on something that can actually get the job done?

GETS YOU WHAT YOU’VE WANTED for DECADES

The Valentine Constitution gets you what you want most politically while you compromise on issues less important to you.

The Valentine Constitution unites the left, right and center behind a common sense deal that gets you what you want most while you compromise issues you care less about.

Puts ALL Americans at the negotiating table.

FULFILLS ALL MISSIONS AT ONCE

Alone, nonprofits, celebrities, candidates and marches have lacked the power to fulfill their missions.

Historically  underpowered nonprofits, celebrities and voters combine their power, focus it on a single common goal, ratification, and finally fulfill ALL their missions at once.

Once this constitution is ratified, nonprofits can finally get down to the more important work of implementation.

If celebrities tell their followers; nonprofits, their members; and voters, their friends and families, the polling numbers will force candidates to vote for ratification or not be (re)elected.

To get the ball rolling, a celebrity need only ask about The Valentine Constitution in an interview or a tweet, without even endorsing it. Risk nothing, just put it in play.

The Valentine Constitution amounts to national legislation that covers all issues, all states and all citizens, and is not easily changed back.

ALL ELSE HAS FAILED

If candidates, nonprofits or marches could solve our problems, they would have by now. We need to try something new.

WHAT’S WRONG WITH OUR OLD CONSTITUTION?

Our current Constitution permits Wall Street monopolies to control our politicians, government and treasury for the price of a campaign contribution.

WHY DO WE NEED A NEW CONSTITUTION?

Pick any issue, our current Constitution fails to solve the problem or even address the issue!

SOLVES ALL OUR MODERN PROBLEMS

Keeps 90% of our old Constitution, foundations and rights intact.

Solves all the modern problems our current Constitution fails to cover.

Our current Constitution allows multinational monopolies to control our politicians, treasury and marketplace for the price of a campaign contribution.

Even your wish list candidates support special interests over yours, and are so polarized, they’re stalemated, even within parties.

YOUR CANDIDATES are POWERLESS

Even if your wish list of candidates were elected, what legislation would they pass? They’re too polarized, and stalemated, even within parties, to solve any problems.

VALENTINE DID THE WORK

LARGEST APP and SITE on EARTH

The Valentine Constitution is the largest political site and app on earth.

To get what you want it must first be written as legislation, then voted on, then have enough votes to pass.

Passing piece by piece all the legislation we need would take too long, even if politicians could agree. It took Valentine 55,000 hours over 45 years.

The Valentine Constitution book is being translated into Spanish, Arabic and Mandarin for countries actively seeking new constitutions.

Valentine is the first person in over 200 years to fully modernize our Constitution.

Valentine spent $5 million and 55,000 hours over 45 years researching and finding solutions to our problems. How much have you given to our democracy?

Marches and protests have failed for decades! The 2 million women’s march in DC was the largest political gathering in the history of the world, yet nothing’s changed! If marches and protests were going to solve our problems, they would have by now.

HOW WE LIVE NOW IS IDEALISTIC

We live in a fairytale where we squander dwindling resources, take no responsibility, and are headed for disaster. Instead of focusing on our mutual problems, we’re going to the game or shopping as though everything’s fine. That’s idealistic.

The Valentine Constitution is our last opportunity to save our children, our jobs, our culture and our species.

GO BACK TO THE FIRST POINT AND REPEAT THEM ALL AGAIN