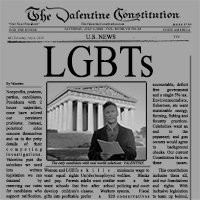 Equality is so obviously a right that it requires no treatise or arguments in its support. To treat one Citizen one way and another differently requires a compelling reason. No cogent arguments have been made to support the exclusion of LGBTs from the equal protection of our laws or from the rights we all enjoy. The most common complaint, even among those gays themselves who do not to participate in certain sexual acts, is that sodomy is “unnatural“, but even straights now routinely commit sodomy.  Pharmaceutical drugs are unnatural, but they make you feel good. I don’t take them and don’t condone them but I won’t stop or harass you. Also unnatural are the chemicals in plastics, and fuel and even fertilizers, all of them ungodly and sacrilegious in their damage to God’s Garden of Eden and to our body’s which are supposed to be our temples. Are we to limit the equality of those who use drugs or plastics or synthetic fertilizers because the practices are unnatural? Anthropologically overcrowding produces homosexuality as a natural check on unsustainable population size. Statistically the rise of same gender relationships tracks in unison with unsustainable population growth in recent decades.

The LGBT issue is primarily a freedom of religion issue since the culmination of the pairing of same gender relationships is marriage, 90% of which take place through some religion. Freedom of religion protects organized religions that marry people, so why not a religion that marries same gender people? Similarly those not in an organized religion but holding an equally conscientious belief in the sanctity of such a union should be protected. Any prohibition on same gender marriage is a prohibition on freedom of religion and on the separation of church and state, two of our foundational principles. We do not invoke religious law like some Moslem countries invoke Sharia law. The church cannot dictate to the state to prohibit an action forbidden by one religion but accepted by another, or to pick and choose which Citizens are protected by rights and which are not. No democracy, especially ours, will ever allow that to happen. Yet somehow Madison’s Constitution has been misinterpreted to accept this abrogation of two of our foundational rights, so The Valentine Constitution clears it up.

The question arises: how does a prohibition on same gender marriage square with the accepted prohibition on Mormon polygamy? Why does polygamy fail to be protected by freedom of religion? First, Mormons do not allow a woman to have multiple husbands? So polyandry fails on the grounds that it violates a woman’s right to equality, again popping up to prove its significance, this time for women who too lack the protection of a constitutional provision on equality. Secondly, common sense exposes polygamy as an obvious sexist subjugation of the female gender additionally illegal under such laws as kidnapping, abduction, coercion, unlawful imprisonment and holding against one’s free will. Women and LGBTs can easily combine their power and that of their numerous nonprofits behind The Valentine Constitution which will be ratified by our elected officials as polling numbers dictate.

Also pertinent to LGBTs, The Valentine Constitution prohibits violations of life, liberty and happiness like taunting, bullying, bashing and lewd sexual harassment which feed the hater’s anger and encourage more violent behavior like rape or spree killing. Additionally, The Valentine Constitution nips the problem in the bud with daily relationship classes in K-12 schools, and for adults nights and weekends, to expose bullies, louts, bashers, rapists, molesters, and spree killers before they become violent. The facts prove that a modicum of empathy by others would have prevented most spree killings. Offenders now hiding in plain sight will be outed. It’s the nicest guy in the room who’s beating his wife or raping his daughter, the beneficent priest or the concerned coach. Victims and witnesses will have a supportive forum to speak out and will have to since under The Valentine Constitution, it’s a crime not to report a crime. Relationship class allows us to know the lives lived by those we go to school with, people we now know nothing about because they’re not in our clique. Communication reveals truth. Without both, ignorance and fear are instead cultivated and prejudices arise from the brainwashing of weak malleable personalities by strong fearful personalities, one of many might-makes-right hallmarks of a malfunctioning democracy.

We’re all God’s children, made in God’s image. Is God a “he” or a “she”? Does God have a gender? Who knows? Who cares? LGBTs aren’t hurting anyone. You don’t have to date, like or even accept LGBTs if you don’t want to, but you will have to let them live their lives in peace.