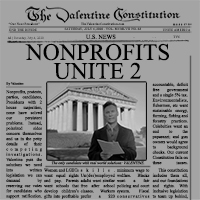 Nonprofits, causes and Citizens can finally fulfill their missions by teaming up behind inclusive legislation. All foundations, nonprofits and causes have failed for decades to fulfill their missions, or even get any legislation written, let alone voted on, or passed. Why waste more time and money on fundraisers, protests and campaigns when our “cantidates” will get nothing done in their deadlocked legislatures, stalemated even within parties. Even recent Presidents with majorities in both houses of Congress have failed to pass any meaningful legislation. Candidates divide us with problems when they should unite us with solutions, but they’re doing well while we fail. They do better when they don’t solve our problems.

Nonprofits and causes fail decade after decade because they ask for legislation when they should instead demand it, but lack the appropriate legislative vehicle and the political power. The Valentine Constitution provides both, putting all at the legislative negotiating table for the first time in your nonprofit’s life, with your dream provision part of the deal, and the fulfilment of your mission at hand. Also in support of your mission will be other nonprofits, causes and independent Citizens combining their power to get what they want. It’s a no brainer, but never considered until now because first someone had to spend 40 years creating all the integrated solutions and deal points acceptable to all the parties involved. Keeping our foundations and rights intact, The Valentine Constitution fulfills 80% of nonprofit missions. There’ is nothing more powerful on earth than a constitution, or a few thousand nonprofits united in its ratification.

Any nonprofit can now pick up the phone and call almost any other nonprofit to consider the paths towards ratification of this mutually beneficial piece of legislation. Each nonprofit may pursue ratification as it sees fit and need not collaborate at all. The power is in the focus of all those resources on the same goal: reification. How this power is focused is immaterial to its success. Craft your own agenda and/or collaborate as you see fit. Because support pouring in from all over will be more powerful than a coordinated effort possibly mischaracterized as left, right or center when in fact it’s all of them, TheValentineConstitution.com is only an informational resource for al supporters and their issues with all the tailored messages and winning arguments issue by issue in every possible form including click to share, and no advertising. Senators and Congressman being asked by numerous nonprofits and Citizens for the same thing, a vote FOR ratification, will not be hard to convince. Polling will do the work; all we have to do is say we want it.

The coalition of voters represented by The Valentine Constitution is powerful enough to dictate the outcome of any election but have never had inclusive legislation to team up behind. A few well known nonprofits or causes or a bunch of small ones holding a press conference to endorse ratification is all the spark needed to begin the process. As soon as it’s revealed to the national audience, people will learn that it gives them what they want and polling will be overwhelming enough to ratify it quickly. We don’t need people to DO anything, just poll “for ratification”. The bandwagon will quickly include most celebrities and nonprofits, whose causes and missions ratification will finally fulfill. Ratification only ends phase one and begins phase two: implementation. We have lots of work to do. Do the math then do the deal and let’s move on to solving new problems.