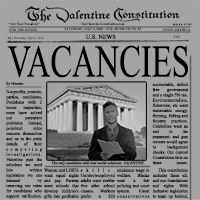 The Valentine Constitution reaffirms the authority granted to Presidents and Governors to appoint the officers of various departments and agencies with the approval of the upper house of our Legislatures, but shortens the time for both nomination and confirmation to ensure that the government is staffed to do its important work. The Madison Constitution puts no limits on the time it takes for the legislature to approve Executive appointments. This has led to long term vacancies and delayed work due to vacated offices. Legislatures are often sidelined by the political implications of certain important appointments. This is not what Madison intended, so the problem is rectified by The Valentine Constitution which puts time limits on the approval of each appointee, and, whenever 3 appointees for the same job are rejected by the Senate, calls for our Citizens to elect the appointee from the rejected nominees. This pressures the Senate to fill the appointment since they would rather use their power than give it to the Citizens in most cases. Filling vacancies quickly avoids the interruption of work created by the politics surrounding the slew of posts now vacant for long periods of time throughout our government.

The Valentine Constitution gives the respective Chief Executive (President or Governor) 30 days after a vacancy is created to present the first nominee to the upper house who will have 2 weeks to approve or disapprove of the nominee. If disapproved, the Executive will have only one week to make the next nomination, since it will probably be made from a list which should already have been compiled during the first 30 day consideration period. The upper house will have 2 weeks to confirm or reject, and if rejected, the Executive will have one week to make the 3rd and final nomination. When the President or a Governor fails to make a nomination in the time allotted, the lower house (The Representatives or Councilors) will within one week by majority vote, nominate one of their own choosing who will then be confirmed or rejected within 2 weeks by the upper house. If rejected, the President or a Governor has one week to make the next nomination, or the task falls again to the lower house.

If the Senate rejects all 3 of the President’s or Governor’s appointees, then the respective Citizens will settle the matter by voting in order of preference from the 3 nominees. The effect will be pressure on the Senators and Legislators respectively to confirm one of the President’s or Governor’s nominees or else be forced to have the Citizens confirm one from their rejects. The unlikely worst case scenario leaves a given post vacant for 4 months and one week, that’s 30 + 7 + 14 + 7 + 7 + 14 + 7 + 7 + 14 + 30, if my math is correct. This fail safe ensures that someone gets nominated and the post gets filled in a timely fashion, while still allowing plenty of time to responsibly fill the vacancy, and avoiding vacancies of a longer duration which are now commonplace.