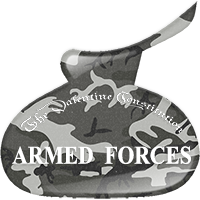 The Valentine Constitution combines and streamlines all branches of our Armed Forces, Homeland Security, TSA, ICE, borders, ports and airports into one department with one chain of command and no task overlaps. This one Armed Force will be split between military functions with boots on the ground, and civilian functions with shoes in the office supporting military operations and their logistics. The Civilian Branch will more efficiently and transparently administer overall strategy and goals, as well as procurement and support, account for every penny, and confirm that we got what we paid for, something our military has failed to do in decades. The Military Branch will then be free to focus on its military mission without financial or political interruptions or distractions. or questions as to their mission, its ordained purpose or its resolute support. These two branches will police each other while Citizen oversight will complete the criss-cross of checks and balances. Obviously, the restructuring plan will be tested, reviewed, critiqued, improved and resubmitted until acceptable, then rolled out in small portions to be improved as more is rolled out, reviewed and improved.

Assigning retuning soldiers to invasive species eradication duty with imbedded pro bono hunter psychologists doubles as an aid to assimilation back into civilian life, and may cure PTSD. Later or optional assignment to civilian support branches will allow direct feedback from those they support.